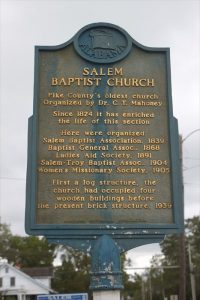 Alabama was only 5 years old and America itself had been in existence less than half a century, when Salem Baptist Church (Originally called “Bear Creek Baptist Church”) was organized. Salem has a rich and colorful history and we’re proud to share parts of it on this page.

“This church is one among the oldest in Southeast Alabama, being organized in 1824, due largely to the influence of Dr. Charles T. Mahoney, a practicing physician and farmer, who came from his native state of South Carolina and settled near Pea River in Pike County a few years before then. It was first known as Bear Creek Church, and was located near the small stream of that name two miles or more southeast of what is now the business section of Brundidge. The structure was of logs with a puncheon floor and the benches were of boards held down by long poles pinned down at the ends. That band of Christian men and women, although small in number, was a band of heroes and heroines who dared the perils of the wilderness, perhaps for conscience sake, and while now we may not be able to give any of their names, their “works do live after them”.”